Two iconic JDM classics in their most popular forms. The Nissan Skyline V-Spec II in Bayside Blue and the Mitsubishi EVO 8 MR in Gun Metal Grey. Values for tidy, low and medium mileage examples continue to escalate. These models were not sold locally in many markets outside Japan, leaving import as the only option in obtaining one for those outside Japan. We take a look at the history of two currently for sale at an import dealership in Australia.

Tracing the history of JDM vehicles that have since left Japan is tricky without specialist knowledge, something unscrupulous importers and dealerships have been using against consumers for years. With the recent actions of NSW Fair Trading, some of the worst operators in the business are now under serious pressure to explain their practices. Unfortunately it's the case that there are plenty more dodgy operators out there looking for a huge pay day off the back of the uninitiated consumer. 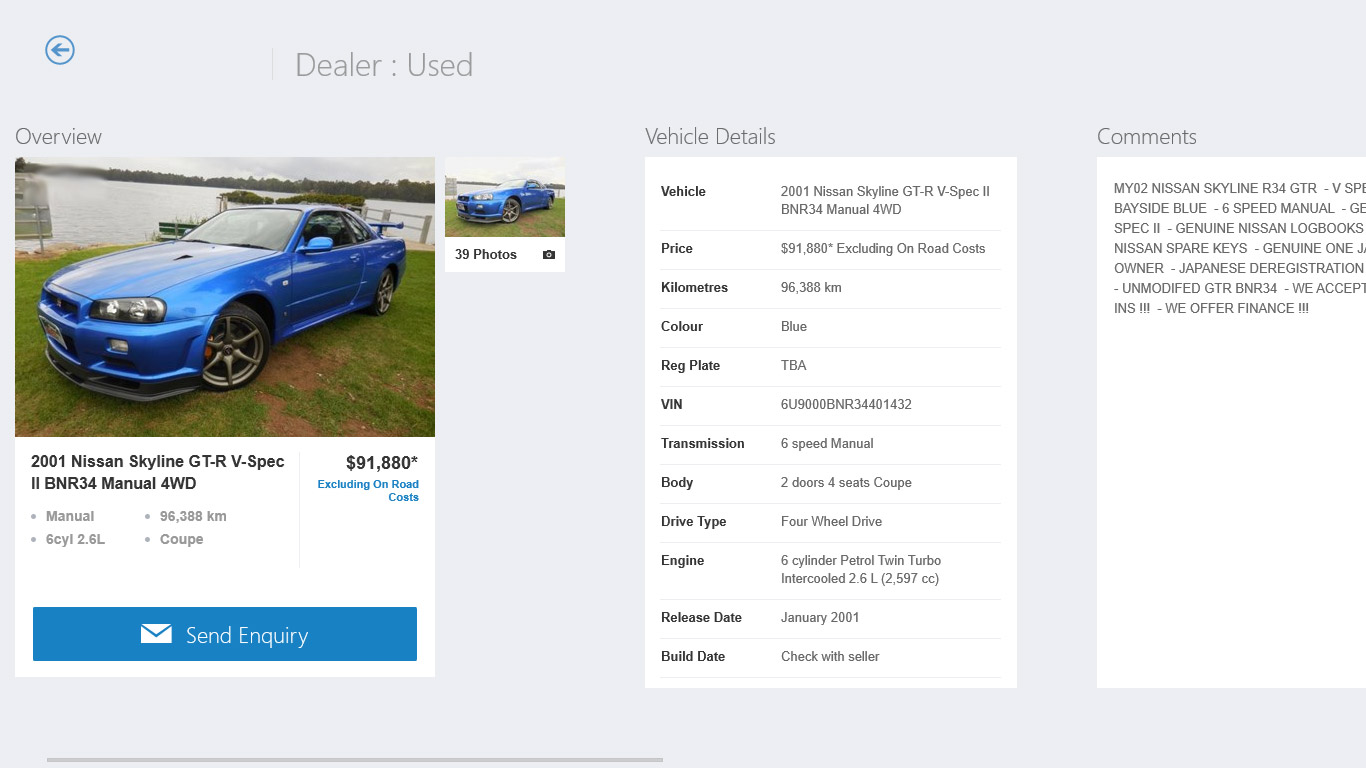 96,388 kms on the clock and "JAPANESE DEREGISTRATION PAPERWORK" is provided with the sale according to the notes. The Australian complied VIN supplied with the advertisement is 6U9000BNR34401432, containing the Japanese chassis number [BNR34-401432].

We've run a full comprehensive check for both cars to show you how our service works. Let's take a look at the 'deregistration paperwork' for the Skyline - more accurately referred to as the 'registration certificate', which we've retrieved direct from Japan: 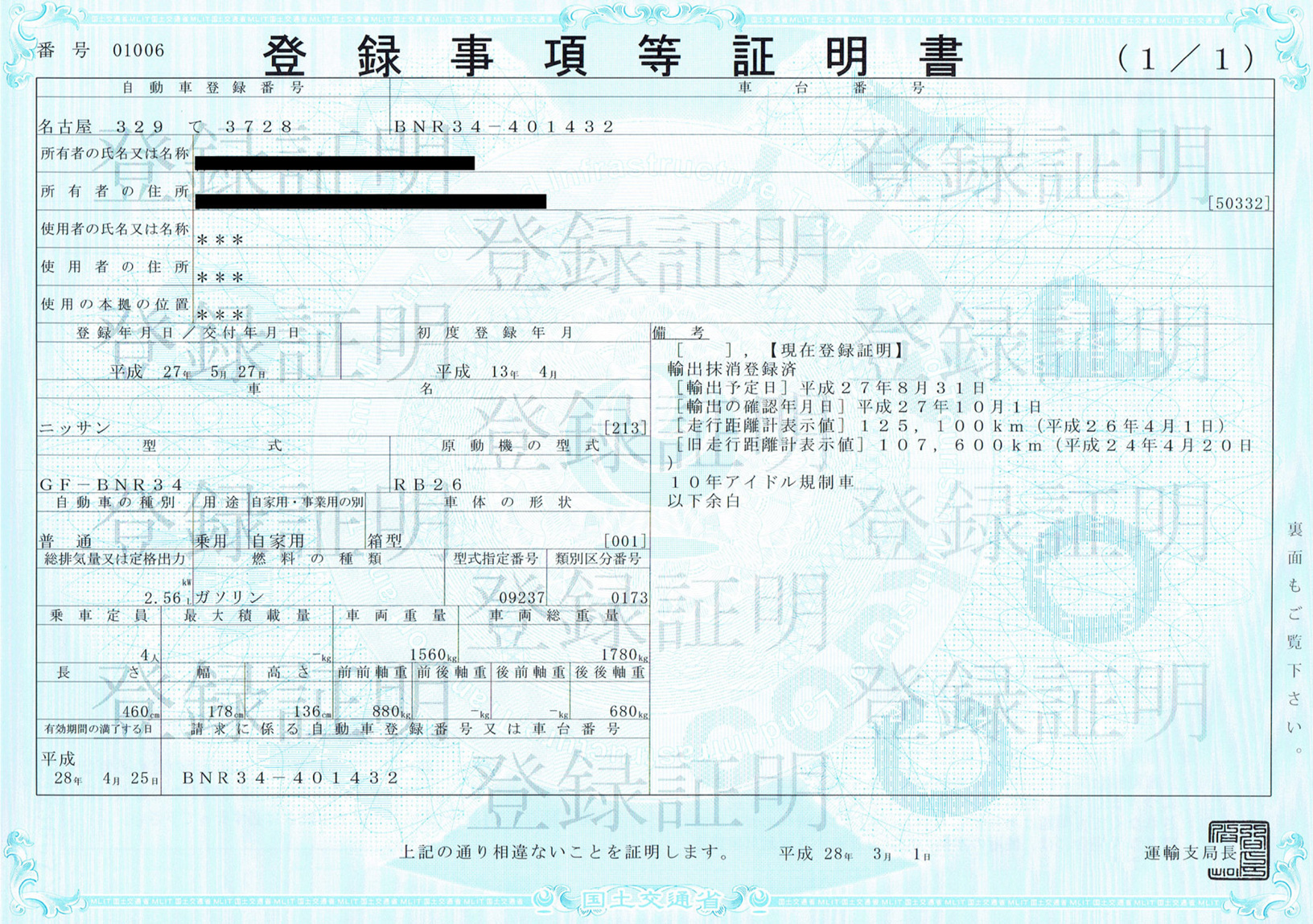 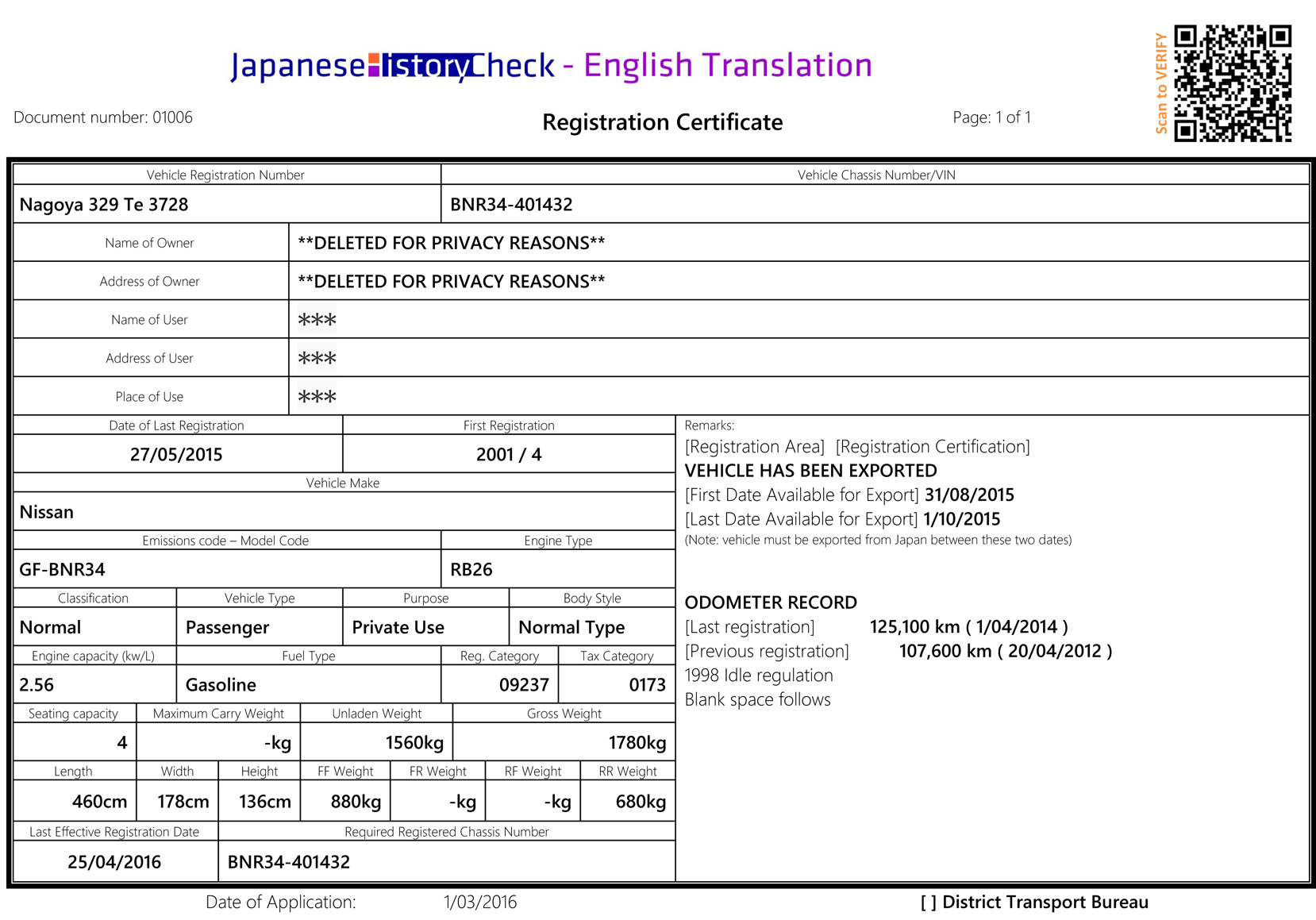 This document records the mileage at the last two times the car has it's registration renewed in Japan. A registration renewal always lasts for two years. It's quite interesting that the dealer is obviously claiming to have a copy which reads quite differently. We picked up ours from the source - the Japanese Government Transport Bureau (MLIT), wonder where they got theirs...?

Unlike other odometer verification services for imported vehicles, we can also get you the auction sheet, which gives you the final mileage reading before export (amongst other useful information). Let's see what the auction sheet says about this GT-R: 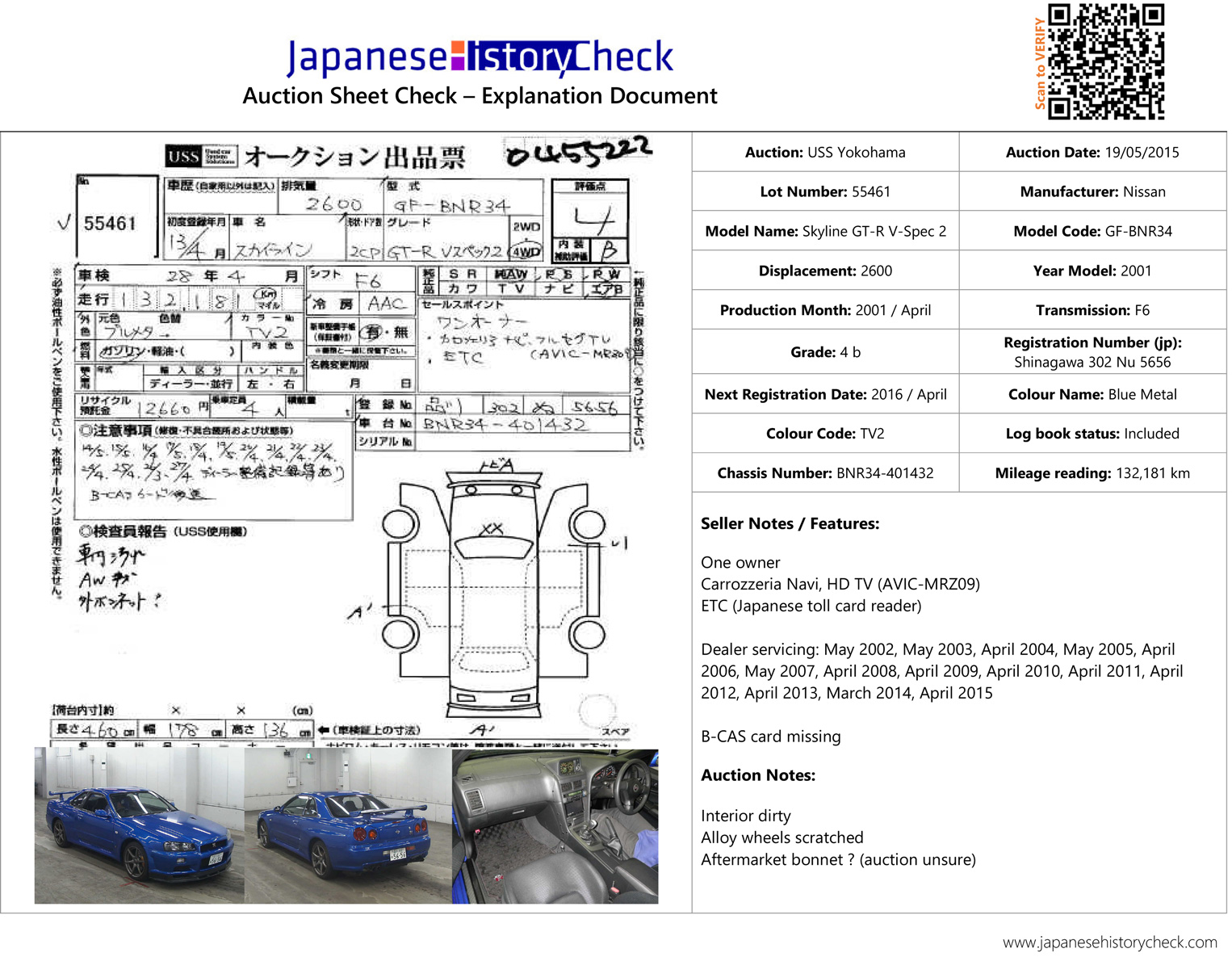 With a 4B grading, we can be assured that the vehicle has no accident history and is in good overall condition.

As such, we can say that this vehicle has had it's odometer rewound by some 35,793km.

Don't take us the wrong way, there is not much wrong with this car - it's a good example that has obviously been well cared for by it's Japanese owner. The fact that it's odometer has been fiddled with is what infuriates us. It disrespects the car, it's previous owner, and Japanese car enthusiasts in general.

This 34 Skyline GT-R shows just how profitable this shady practice has been for dealerships. Should the dealership achieve somewhere close to their asking price, we figure the buyer would be paying $30k MORE than it would cost if the buyer had imported the exact same car himself.

Now to this Gun Metal Grey EVO 8 MR, advertised with 93,270 kms on the clock. The Australian complied VIN supplied with the advertisement is 6U9000CT9A0303068, containing the Japanese chassis number [CT9A-0303068]. Curiously 'deregistration paperwork' is not offered this time. 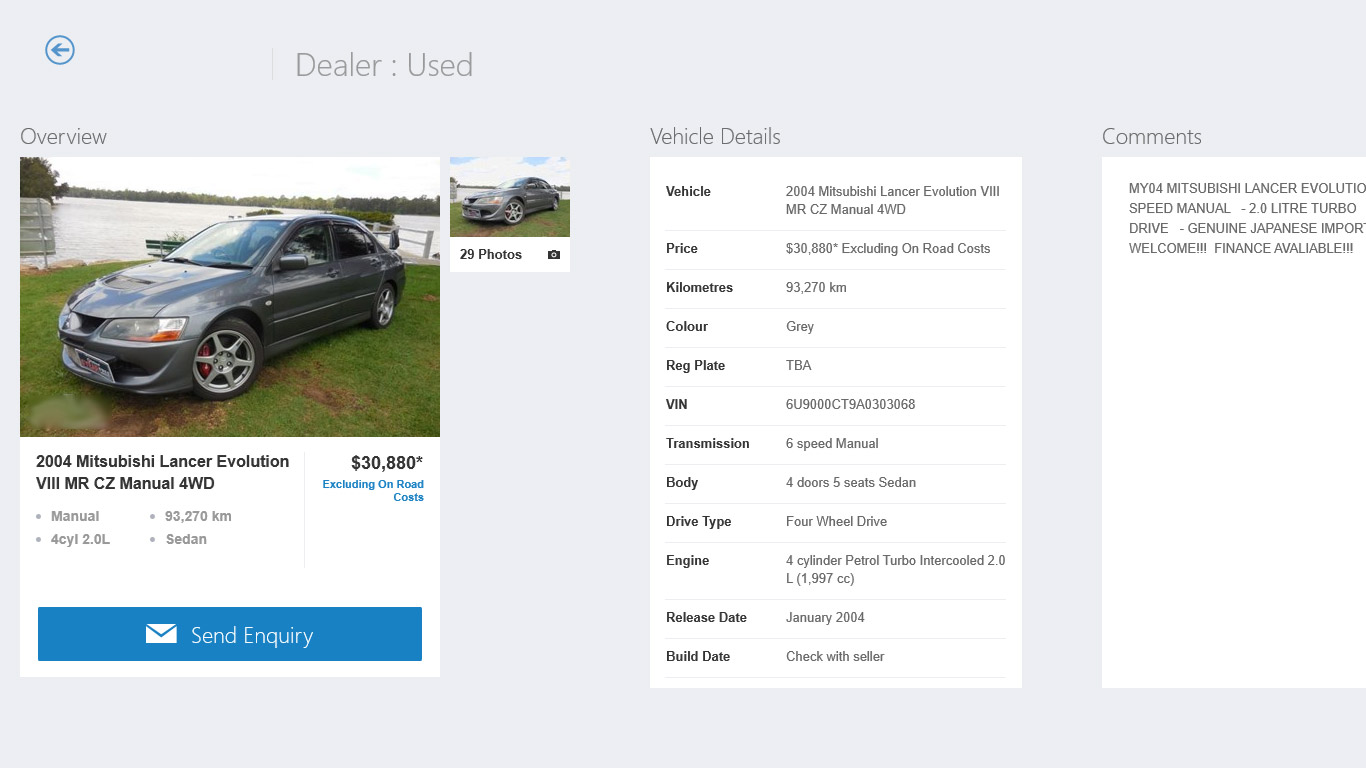 Again, per our comprehensive check, first the registration certificate which we've sourced direct from Japan: 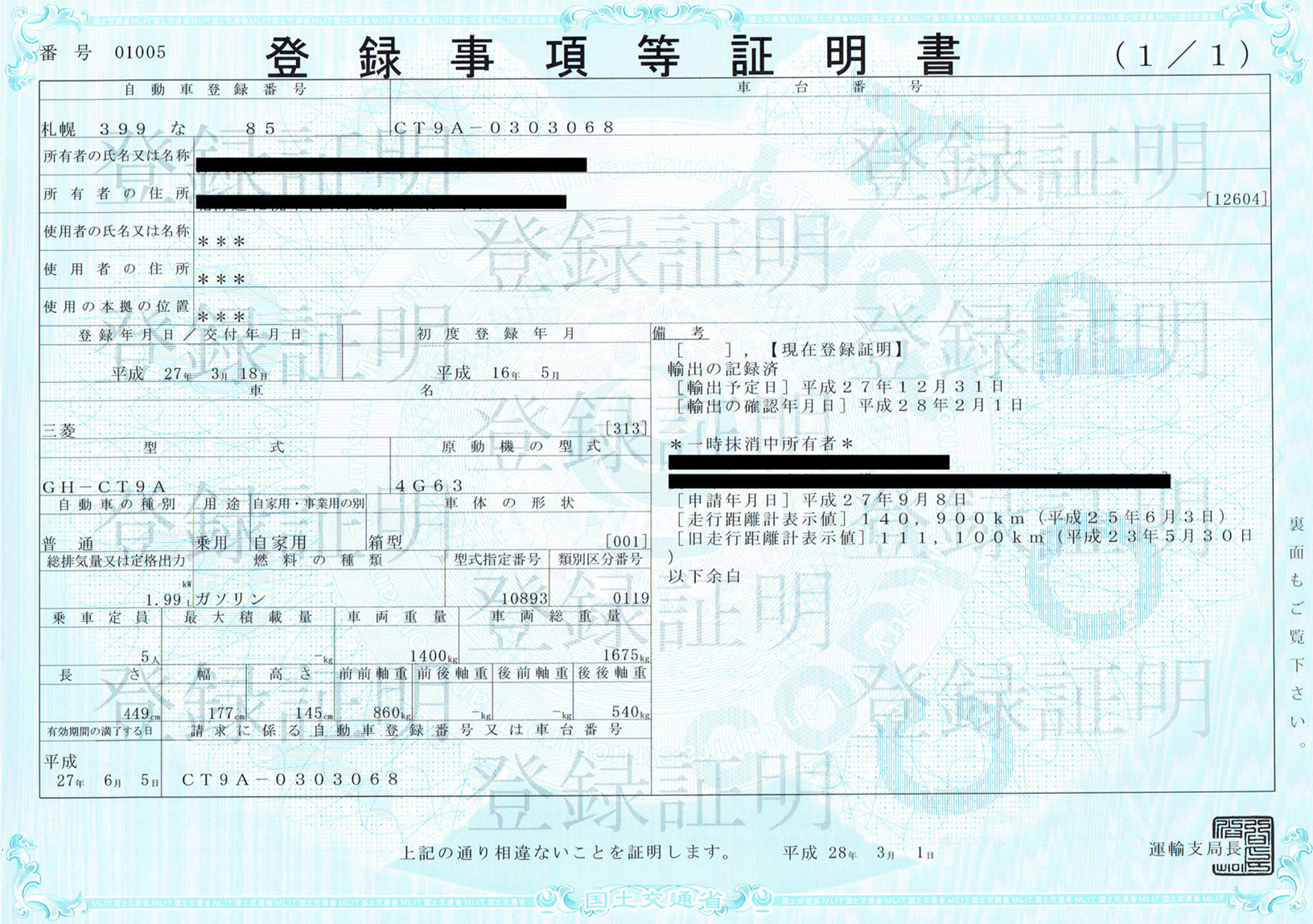 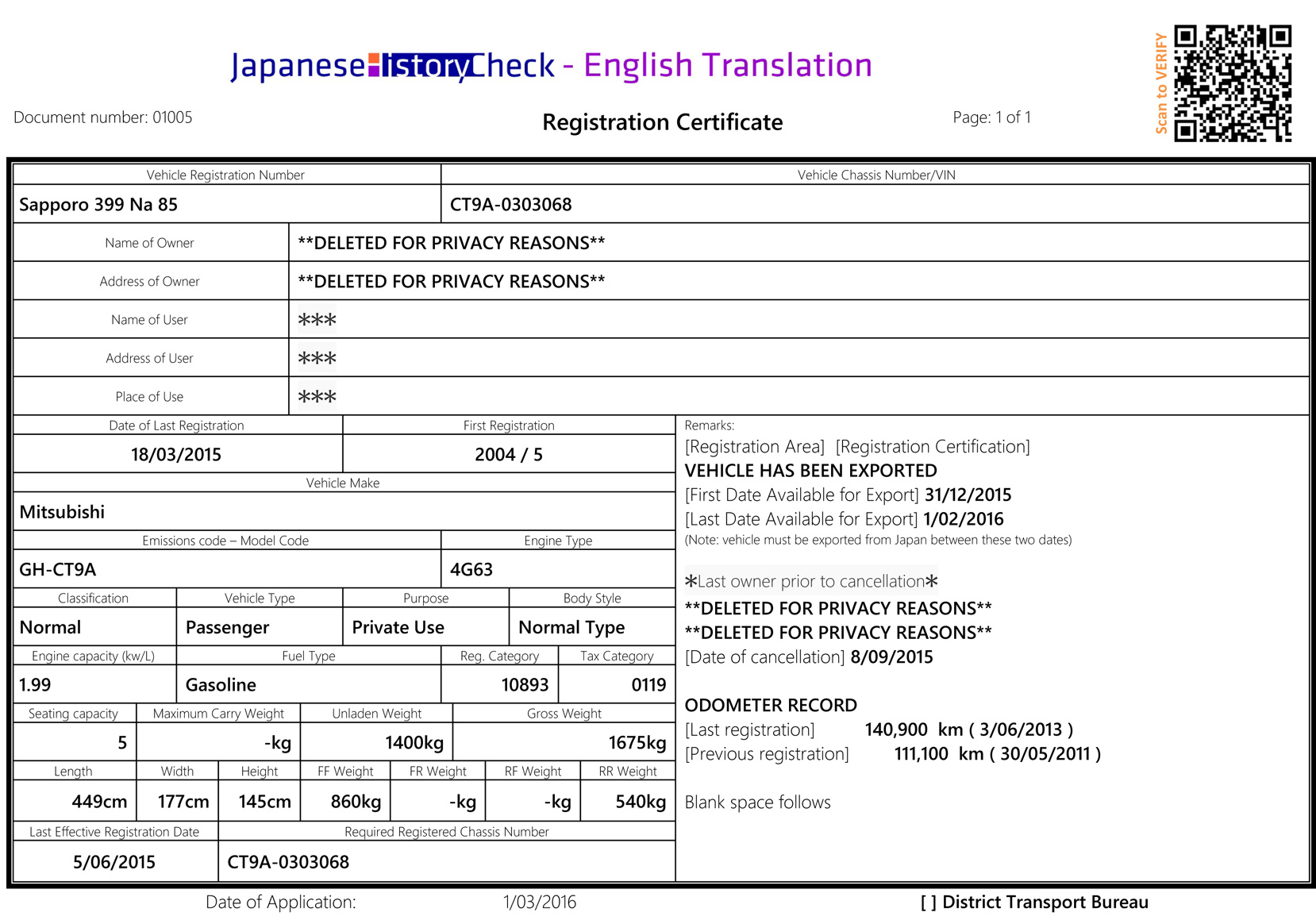 Already we can see a huge discrepancy from the reading as advertised. As you can see, the last mileage reading was recorded in June 2013, that's more than two years before the vehicle's registration was cancelled and the vehicle was scheduled to be exported from Japan in September of 2015. The car must have traveled further in Japan prior to export.

Let's see what the reading was when the car went to auction at JAA on 2nd September 2015: 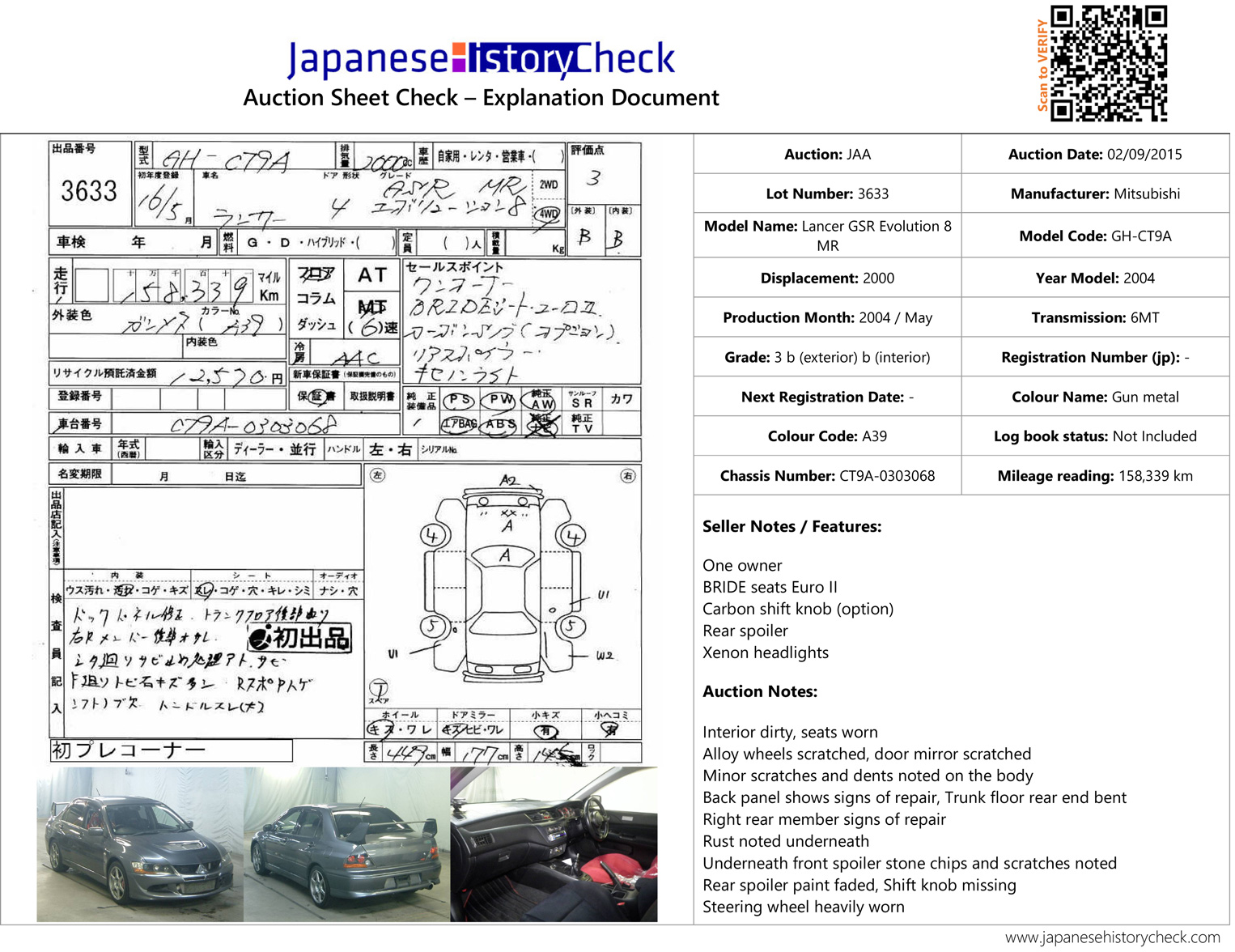 A grade 3 BB shows that the vehicle was in poor condition when it went to auction, with some signs of repair the vehicle narrowly missed out on an 'R' (repair) grading. This car did indeed travel a further 17,439km since the last recorded reading which appears on the Registration and Export Certificates. As a note of interest, you can see that the dealer has replaced the steering wheel with a brand new MOMO in order to avoid questions that would have been raised by the heavily worn wheel as noted on the auction sheet.

This dealership has been involved in dodgy tricks previously, exposed in an article we wrote back in October 2014, which went viral at the time (for those that missed it - click here). It seems no lessons were learnt by the dealership off the back of this article, with the mode of operation being almost identical, albeit this time it's the odometer which needs to be questioned.

That doesn't mean they are alone in this practice, there are plenty of others playing the same game. If you're looking to buy a JDM vehicle, your best protection against dodgy dealers is to get hold of a genuine Registration Certificate and Auction Sheet for the car. Both documents ensure you get the whole story, not half of it!

Our checks now come standard with QR code verification, so that you can scan the results using your phone to verify that you are indeed looking at a genuine check we've provided.

Want to know more about the services we offer? See our service page.